Preparing Now For The Next Housing Uptick 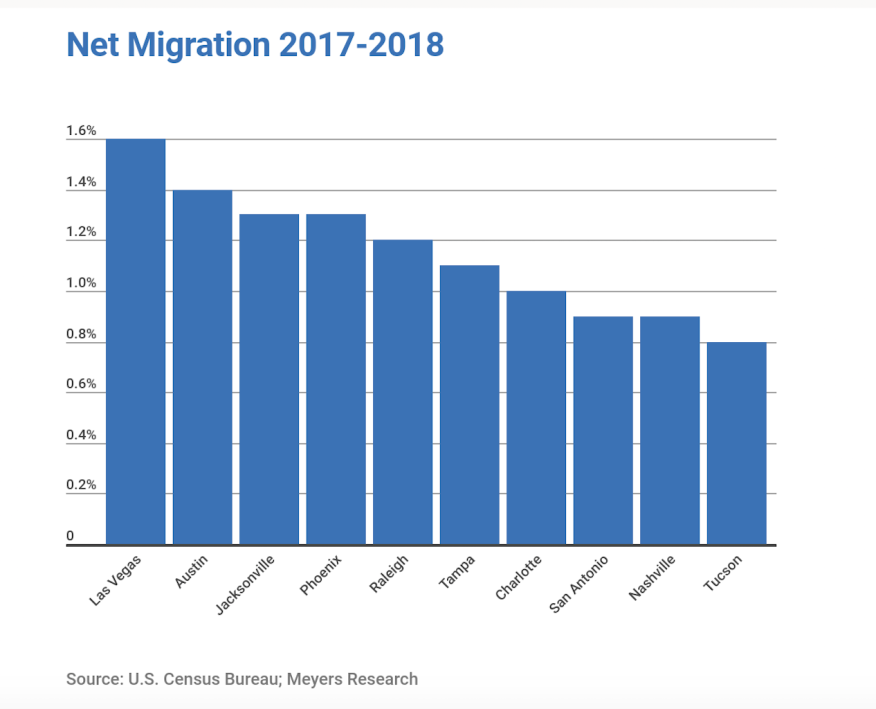 Interesting article published on builderonline.com discussing In- and out-migration trends that matter most to home builders, residential developers, and investors planning for 2023 and beyond. Read more at:
https://www.builderonline.com/land/local-markets/preparing-now-for-the-next-housing-uptick_o

Of the ten markets with the most positive domestic net migration*:

Las Vegas, Austin, and Jacksonville hold the top spots for positive net migration and are also among the top performing housing markets so far this year.

Las Vegas is the new #1. Las Vegas has been in the top ten for positive net migration since 2013 gradually moving up. For 2018, Las Vegas bumped Austin, the reigning champ for five consecutive years, down to the second spot. Las Vegas averages about 100 people moving to the metro a day and Redfin search data suggests the new residents are coming mostly from the West Coast, including Los Angeles, the Bay Area, and Portland. This contributed to Las Vegas having one of the best average sales rates per community in 2019, at 3.06, according to Zonda.

Austin hits the relative affordability sweet spot. Austin’s new home communities have the biggest year-over-year jump in average sales rate among top markets year-to-date, up 19% from the same period in 2018. The average new home list price in the metro of $328,000 is 26% higher than the average of the 10 best-selling new home communities over the past three months. In the metro, nearly 61% of households can afford the median-priced new home, a relatively high percentage compared to other top markets due, in part, to two reasons:

Jacksonville’s fourth year in the top 10. Jacksonville first appeared on the list four years ago at the fifth spot before moving up to number three last year. The market averages nearly 60 people moving in a day, up 6% from last year. Like Austin, this trend has aided Jacksonville to a place amongst the biggest growth markets year-to-date with an average sales rate of 1.82 per community, up 8% YOY.

WINNERS (AND SOME LOSERS) OF MIGRATION TRENDS

The data allows for trends to be seen in multiple categories, including daily, international, and negative net migration. Here are some other notable takeaways from the newly released stats: